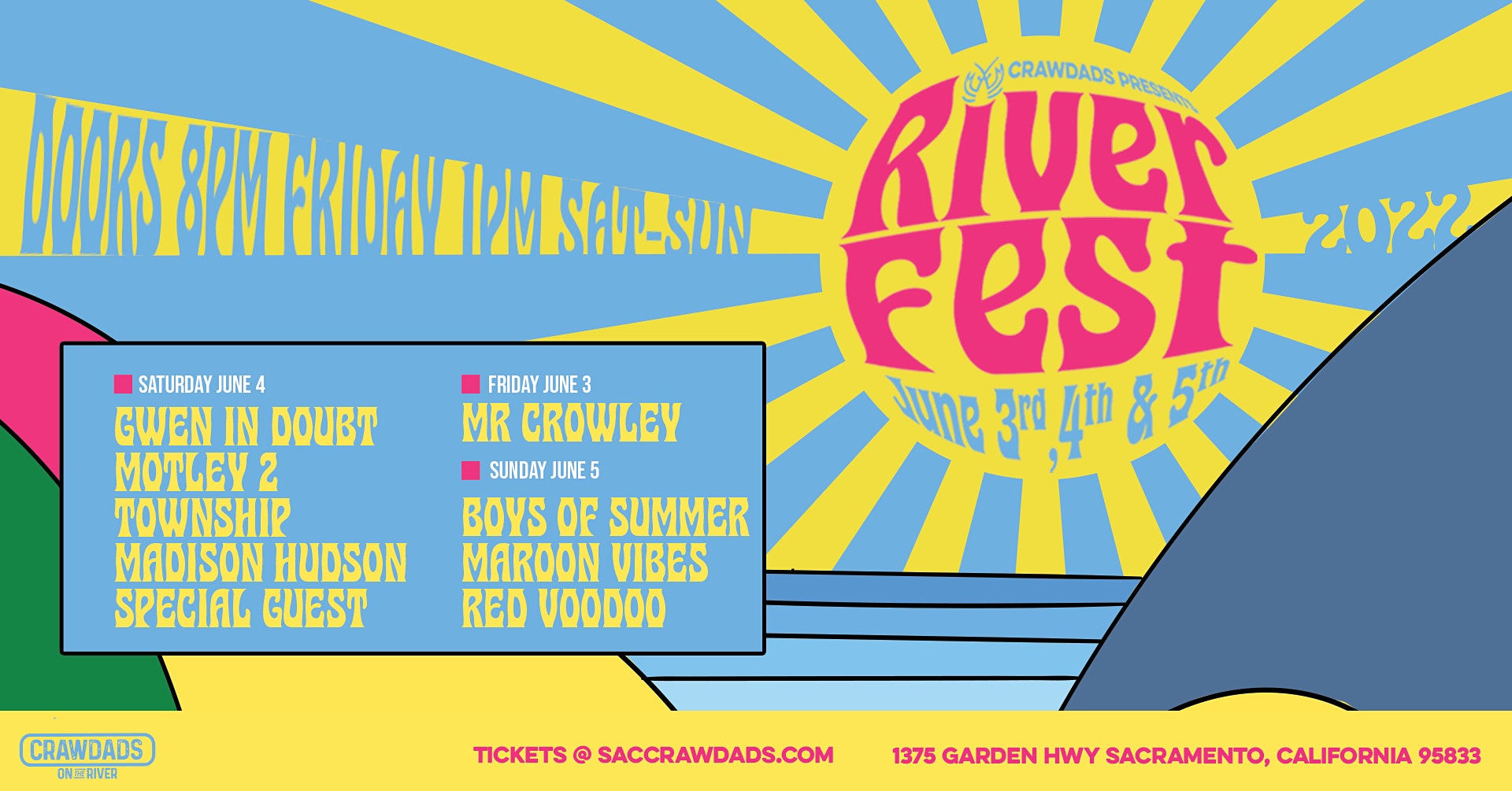 Crawdads on the River presents River Fest 2022 with Gwen in Doubt, Motley 2, Township and Madison Hudson

Nashville Recording Artist from Wheatland California. Madison has a current single and video on Country Radio and CMT. Madison started her career here in Sacramento and has been entertaining crowds throughout California and Nevada. Always a fan favorite with her amazing vocals. Influenced by Miranda Lambert, Madison has a style all her own. Madison has opened for Chris Lane, Dylan Scott, Devan Dawson and Maggie Rose. She has been invited on stage to perform with the Doobie Brothers and has closed out the night for Brad Paisley. Madison will be singing your current country favorites and several of her own.

With roots in various styles of music, and taking inspiration from one of Alan’s original songs, the newly branded “Township” isn’t afraid to branch out from the typical country classics and delve into southern rock, blues, classic rock and beyond. These young professional musicians have played with national and international touring acts such as Big and Rich, Merle Haggard, Montgomery Gentry, Tyler Farr, Clint Black, Deana Carter, and even Tesla. With combined talents and experience, the members of Township have played the US from coast to coast, and everywhere in between. In the winter of 2018, with Alan on board, the decision was made to create a band that would not only draw people in, but blow them away and have them screaming “One more!” Township takes pride in their professionalism and expert musicianship while putting on an amazing rockin’ country show – sometimes with 5 part harmonies!

Individually active in Northern California’s music scene for over 10 years, the members of Township came together to create a country music show to be remembered. Co-lead guitarists Dillon Whitsett and Casey Doss, together with the rhythm section powerhouse of Brandon Hood and Cole Martin, approached country singer/songwriter Keegan Alan – a high school friend of Doss, Whitsett and Martin – to front their new band, revamp their set list to fit Alan’s vocal style and take 2019 by storm.

Based in Los Angeles California, Motley 2 is the premiere, internationally touring tribute to Motley Crue that captures the entire look , feel  and sound that hard core Crue fans know and love. We have toured extensively across the nation and abroad, and have performed at casinos, bars, clubs, festivals, state fairs, concert in the parks, and corporate events.

THE GWEN IN DOUBT PROJECT WAS FORMED AS A TRIBUTE TO GWEN STEFANI AND NO DOUBT IN THE SUMMER OF 2003.  BASED OUT OF RENO, NEVADA.   THE PROJECT ITSELF IS FRESH AND EXCITING HOWEVER THE MEMBERS HAVE EXTENSIVE EXPERIENCE AND CREDITS AS ENTERTAINERS AND PERFORMERS.

TAMMY STARTED PERFORMING WITH RADIO RAGE, A BAND BASED OUT OF LOS ANGELES, PLAYING SHOWS AT PLACES FROM DISNEYLAND TO LAS VEGAS. TAMMY BELIEVES THAT MUSIC IS POWER AND THAT FORCE HAS DRAWN HER TO SPEND HER TIME WRITING AND RECORDING ORIGINAL MUSIC. UNFORTUNATELY, THE UNIVERSE ALSO COMMANDS THAT MONEY IS POWER, AND TAMMY SPENDS A GOOD DEAL OF TIME PERFORMING IN DUOS, COVER BANDS AND TRIBUTES FOR HER LIVELIHOOD. OF ALL HER PROJECTS AND ENDEAVOURS, GWEN IN DOUBT IS HER FAVORITE. IT FITS LIKE A GLOVE.

RECENTLY, TAMMY’S SINGLE GLASS OF WINE FEAT. OPTIMIZTIQ WAS FEATURED ON THE YOUNG AND THE RESTLESS. TAMMY’S SECOND SOLO CD, BRAIN TAMAGE, IS AVAILABLE ON iTUNES OR AT CDBABY.COM. VISIT WWW.TAMMYTAMTAM.COM FOR MORE INFORMATION.