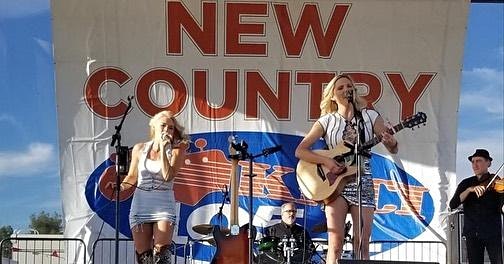 Live on the River

The Ariel Jean Band is a Fresh off the charts Rockin American country band from Nor Cal that local radio and television stations are raving about! After the bands performance on local ‘Good Day Sacramento’ morning television show, Cody Stark (Anchor) quoted them to be “the best band ever on the show!” They’ve had recent performances on local fox 40 news promoting their concert series “mama knock you out” performing original music live on television.

The band is famous for their original unique sound of the sister trio Ariel jean, Amber Joy, and Aubrey Anne, who sing three part harmony to their original songs, written by singer/song writer/guitarist Ariel Jean, and cover songs. The band has opened for and shared the stage with The Eli Young Band, Cadillac 3, Eric Paslay, William Michael Morgan, John King, and more!

In July 2017 the band held their first ever SOLD OUT CD release party at the Opera House saloon in Old Roseville stunning the crowd and club owners with a sold out room of fans and celebrated in their VIP room with their close family, friends, and fans. Now, in 2019 they have held two sold out CD release shows, Releasing a music video, and two EP’s on I’tunes in just under 2 years. They plan to release another EP in 2019, “Mama Knock You Out,” and begin working with Nashville Agent Chris Keaton, While selling their cds in local Dimple records music stores to an impressive 5 store market in Sacramento and two in store performances promoting the new music!

The band is also known for their generosity giving back to their local community by performing at local charity events and donating to families in need.

In August 2017 the band released their first ever music Video of their original hit song “Coors Light Country Girl” that shot up to over 100,000 views in just a short amount of time of its release on youtube and was nominated and WON “best country music video” award by taste TV’s CAlifornia Music Video Awards in San Francisco 2019. Ariel Jean Band is also a two time “SAMMIE” nominated artist locally in Sacramento, for country artist of the year. You can find the bands original music on Spotify and I-tunes, and expect new music coming your way in 2019!! Check out the bands website Arieljean.com, facebook page facebook/arieljeanband , and Instagram for more show dates coming your way!